Finally (?) Understanding Bounds, Frames, and Positions Thanks to Misunderstanding CAShapeLayers, CGPaths and Lines

I will try to keep this short so that I can get this post out.

CAShapeLayer is a canvas upon which you can draw CGPath. It’s bounds, and position must be set manually.
The easiest way to do that is

If the lineWidth property is non-zero, the bounds should be adjusted to contain the entire path plus the additional width of the stroke.

In most regards, the misunderstandings are so basic and fundamental, that I am embarrassed to share them, but on the other hand, I would have loved a “talk to me like I’m stupid” explanation of both of these topics. But still, pretty embarrassed.

Discovery of My First Mistake #

CAShapeLayers are a nice way to draw a CGPath and add it straight to a view’s layer. The way it works is that just like any other CALayer it provides you a canvas, defined by its frame and bounds upon which to stroke the a CGPath. It also provides a number of properties and methods to set the properties of the stroked path.

So I wanted to draw a line from one point to another. Here is what I wrote

and voilá, I get lines, as I expect, where I tap: 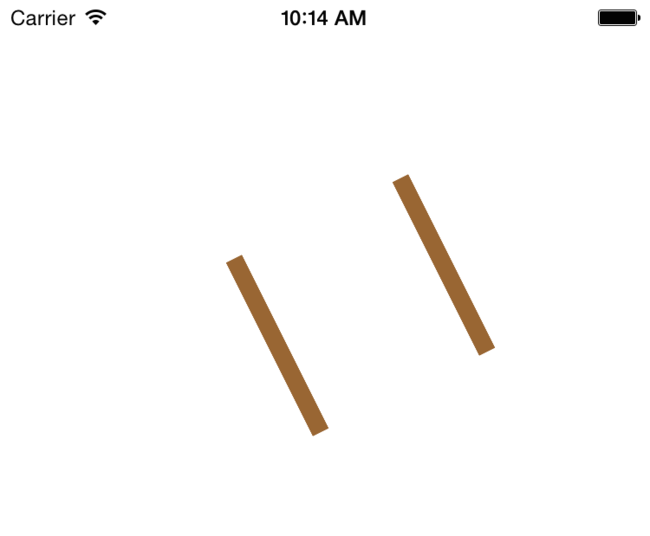 But, I have already messed up at this point, even though things worked

Here’s how I finally discovered my mistake1:

What if I wanted to add a background to this path that I drew? It should be as simple as adding the following line:

Ok, so the only reason this works, is that our path is being drawn relative to the origin of the main view.2

so we can conveniently find the correct bounds with this function:

So, then my misunderstandings really kicked in…
First I just flailed a bit, first setting it this way

but then, oddly, no matter where I tap I see this result. 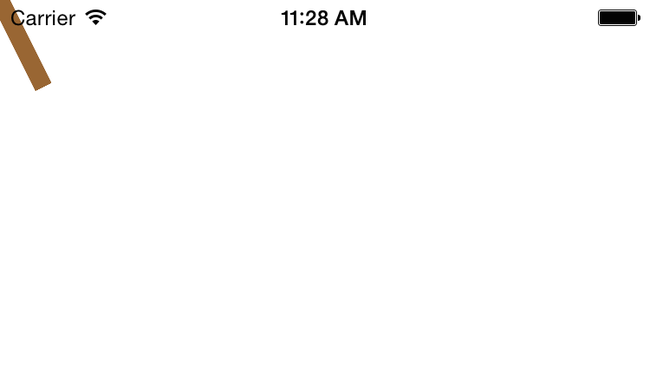 Right! I realized that the frame is a property that is actually calculated from bounds and position, and since I hadn’t set the position, it was {0,0}, and the frame’s origin was set accordingly. Though I was still not quite clueing into why the path that had previously ignored the constant origin of the frame was now showing up in the same {0,0} position.

So, knowing that for CALayers, the frame is just based on the bounds and positions, I decided to set them each individually, as I usually do for a CALayer, setting bounds origin to {0,0} and position for the center of the bounds size: 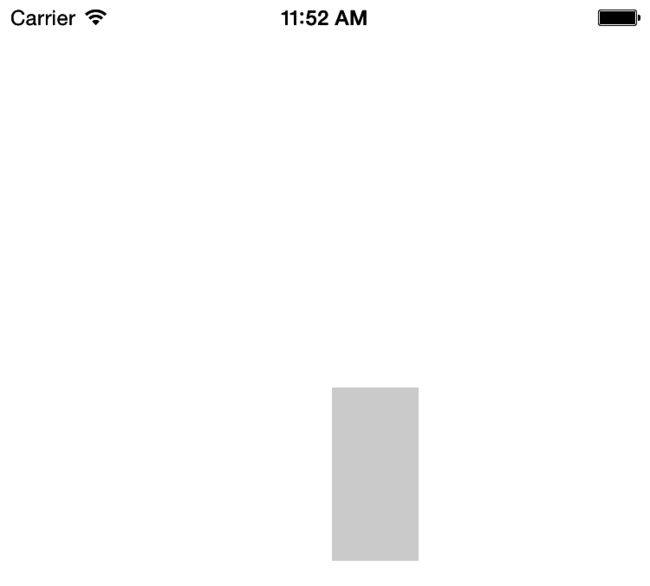 so, progress!? I have the frame where I tapped, but my path has disappeared!!3

which to my eyes, looked correct. I could not understand what was wrong.

Then I was reminded of an Ole Begemann blog post discussing UIScrollView and a helpfully detailed discussion of bounds versus frames with regards to offsetting content in a frame.

…a lot of struggle against my continuing ignorance and misperceptions later…

I finally figured out that all I needed to do was this:

That really did take me a while to understand. This is how it works for all the dummies like me:

A key thing to note is that setting either the layer.position or the layer.frame values will have no impact on the bounds.origin value.

Now I was close to getting the CAShapeLayer correct. I now get this as the result: 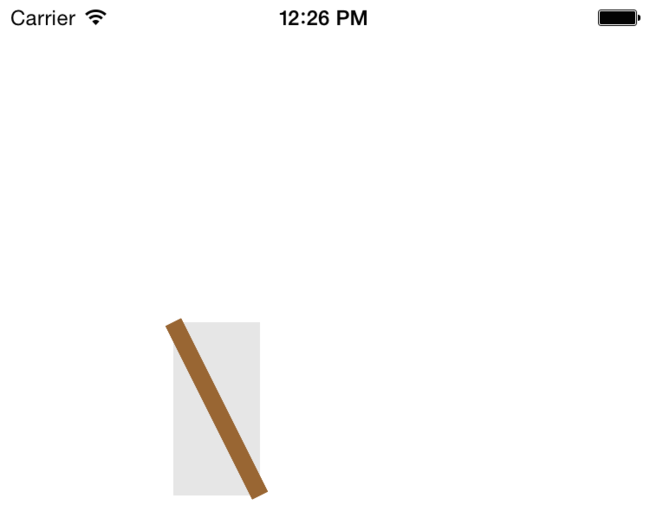 As you can see, the path hangs over the background’s frame, even though we used the CGPathGetBoundingBox(path). Which gets to the heart of a second two-part thing I did not really understand about paths.

These two misunderstanding are at the root of why I never really considered the frame, bounds, etc. of a CAShapeLayer. I thought the CAShapeLayer was the path, or possibly stroked line itself. But as I stated at the beginning of this post, the CAShapeLayer is the canvas upon with the path, or shape described by the path is drawn.

So if I draw the thinnest line that I can in the same place as this thicker line, you can see that the path is completely encompassed by the frame, but that the thickness of the line is drawn outward from the path. I also set .masksToBounds = YES, so that you can see what gets cut off. In fact, this realization was helped along by getting walkthrough of this CALayer animation code by [ken Ferry][@kongtomorrow], which specifically raised the issue of the canvas size needing to be adjusted for the CAShapeLayers lineWidth4 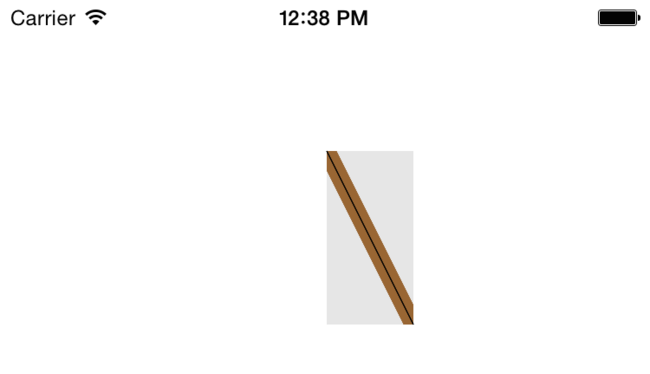 If I want all of the line to show up, I need to widen and offset the frame by the width of the line that hangs over. 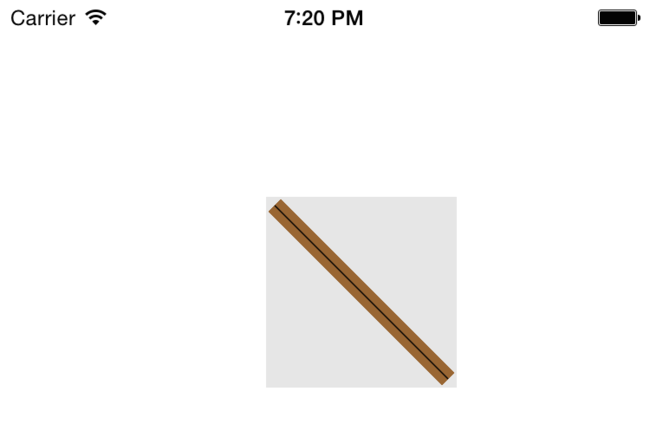 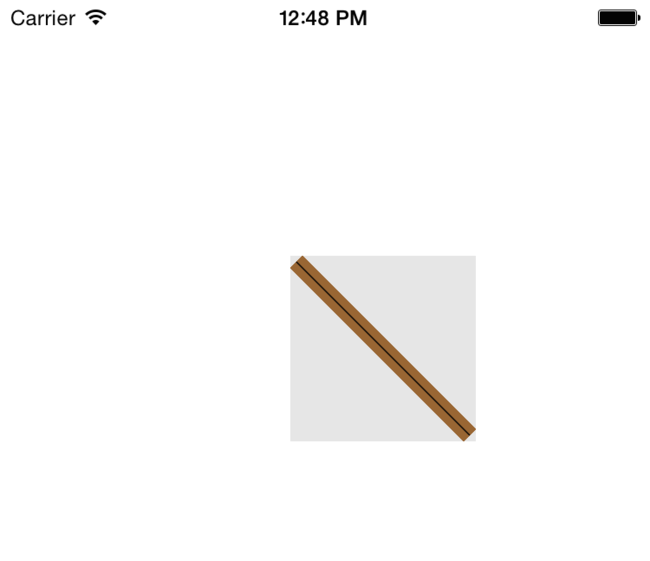 So, there is my overly long explanation of something that should probably have been clear to me by this point, but writing this down has really helped me understand both CAShapeLayer, as well as the role of the bounds.origin in a layer/view much more clearly.

I was inspired by @jaredsinclair a while ago, because I had noticed, as he had, the lovely side-swiping UI in the Twitter iOS app. It is paginated, but there is some of each neighboring card visible. So it has three key features: the... Continue →